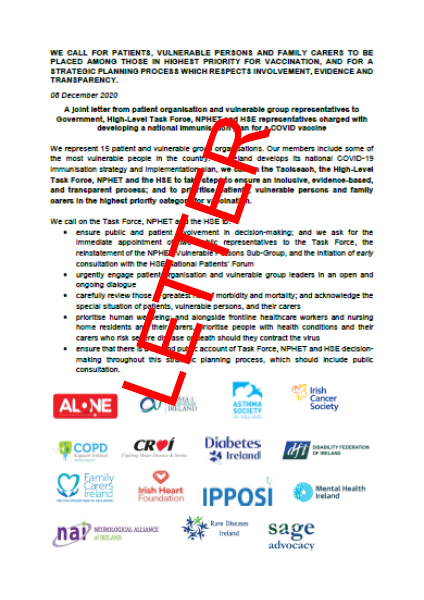 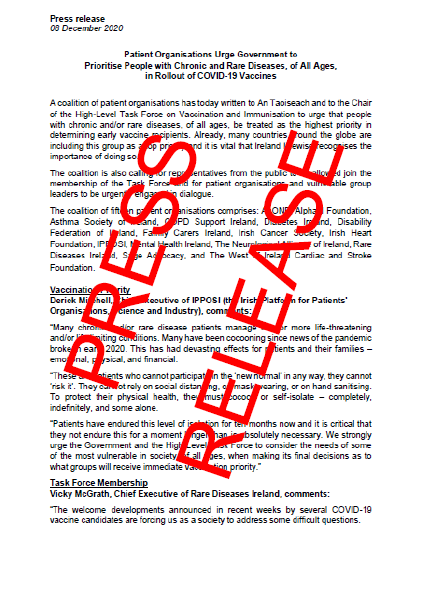 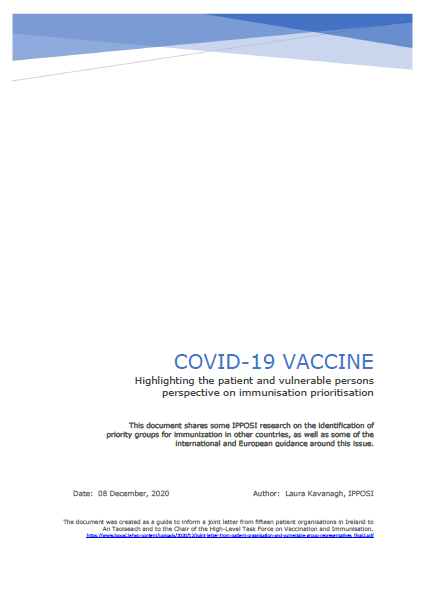 (Dec 8, 2020, Dublin, Ireland) A coalition of patient organisations has today written to An Taoiseach and to the Chair of the High-Level Task Force on Vaccination and Immunisation to urge that people with chronic and/or rare diseases, of all ages, be treated as the highest priority in determining early vaccine recipients. Already, many countries around the globe are including this group as a top priority and it is vital that Ireland likewise recognises the importance of doing so.

The coalition is also calling for representatives from the public to be allowed join the membership of the Task Force and for patient organisations and vulnerable group leaders to be urgently engaged in dialogue.

Vaccination Priority Derick Mitchell, Chief Executive of IPPOSI (the Irish Platform for Patients’ Organisations, Science and Industry), comments:
“Many chronic and/or rare disease patients manage one or more life-threatening and/or life-limiting conditions. Many have been cocooning since news of the pandemic broke in early 2020. This has had devasting effects for patients and their families – emotional, physical, and financial.
“These are patients who cannot participate in the ‘new normal’ in any way, they cannot ‘risk it’. They cannot rely on social distancing, on mask wearing, or on hand sanitising. To protect their physical health, they must cocoon or self-isolate – completely, indefinitely, and some alone.
“Patients have endured this level of isolation for ten months now and it is critical that they not endure this for a moment longer than is absolutely necessary. We strongly urge the Government and the High-Level Task Force to consider the needs of some of the most vulnerable in society, of all ages, when making its final decisions as to what groups will receive immediate vaccination priority.”

Task Force Membership Vicky McGrath, Chief Executive of Rare Diseases Ireland, comments:
“The welcome developments announced in recent weeks by several COVID-19 vaccine candidates are forcing us as a society to address some difficult questions.
“As things stand, dialogue and decisions around the priority groups in line for future COVID-19 vaccines are being taken by a select number of departmental and public authority officials. The 15-member task force includes the Department of Health, the HSE, the Department of Enterprise, Trade and Innovation, the Health Regulatory Authority, the IDA, the Dublin Airport Authority, but not a single representative from the public, or from patient or vulnerable groups. We are therefore calling for the appointment of two representatives from the public to join the membership of the Task Force and for patient organisations and vulnerable group leaders to be included in an ongoing dialogue.”
Kieran O’Leary, Chief Executive of Diabetes Ireland, adds:
““We all recognise that, at least initially, there may not be enough vaccines for a widespread immunisation programme. Demand between countries, and within countries, will outstrip supply. Nationally, we will have to prioritise who receives the first allocation of vaccines.
“Allocation must be made on the basis of agreed ethical values and clinical evidence, in a transparent and accountable environment, where public, patient and vulnerable group representatives are able to voice the perspectives of the most at risk in our society.”

Distressing Time Benat Broderick, Cystic Fibrosis patient advocate, shares:
“As a person living with Cystic Fibrosis, the pandemic has left me with no other choice but to cocoon since early February, due to the risk posed to my personal health. As others have benefitted from an easing of restrictions or a return to a new normal, I however, continue to endure a very worrying and draining set of circumstances. My only hope of re-joining society in any meaningful way, is access to a vaccine. I therefore fully support the call for patients and vulnerable people to be placed among those in the highest category for vaccination.”